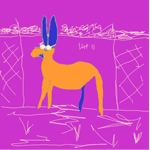 One of the dozens of portraits of Scaramouche produced by Quito (source unknown).

Scaramouche is an incorrigible llama who has a fondness for neenish tarts and quiche lorraine.

He began his entertainment career as a stunt double in such feature films as Around the World In Eighty Llamas; Stop, Look And Listen: a Moving Tale of Three Homeless Llamas; and, of course, Clint Bo Dean In Wigs and Pictures, before finally landing a major role in Scaramouche: My Story, after which he never looked even slightly ruffled.

Born under the sign of the three-toed sloth, Scaramouche has more recently turned his hoof to singing, scoring a hit with his first DNRC Records release, 'Scaramouche's Theme'.

Forever meddling in other peoples' affairs, he can sometimes be seen emerging from his custom-built cage inside the Camp Davey compound in order to scoff meringues and wizz fizz.

He is currently planning to revive his own personal blog, written entirely in Desperanto.