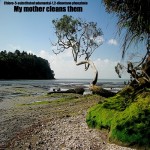 Chloro-5-substituted adamantyl-1,2-dioxetane phosphate thus rode a small but significant wave of popularity for DNRC Records which, given its long history of deleting each of its releases, sometimes before the were even recorded, was a major step forward, both for the label and its hopelessly-dreamlike founder.

And so, we come to Chloro-5-substituted adamantyl-1,2-dioxetane phosphate’s ‘difficult’ first LP, and its barmy title. While the latter may have been generated as part of the original meme crawl, there is nothing at all random about this stunning album, set in a moonscape once used by Howard Hughes for the filming of an atomic-themed Western musical.

What else can possibly be said about this collection of twenty six pop-by-instruction post-perfect lessons in the chemical arts, except that like all cocktail albums it is filled with a staggeringly diverse range of lo-fi sounds and influences, a fusion of elements expressed perfectly on opening track and album stand-out ‘Straight To Wallpaper’.

What else can possibly be said about this ten minute Powerpoint presentation of a song – with its towering chord arrangements between slides and an intricate light-show of sonic wonderment throughout the breathtaking final six minutes, where the robotic chisel of Johnny ‘Mango’ Mars’ guitar work is let loose in a field of syncopated drum fills (Gin Desole) and bass drills (The Exit) that drifts towards its unexpected conclusion, a chipmunk whale chant coda to waken the dead – except what I just said?

Fans of the education through music genre will warm to the presence on this disc of several medleys, which in a ‘cute’ way summarise the backgrounds of the three band members, and their individual contributions to the emerging foodcore scene in Melbourne’s inner suburbs, especially the newly-electrified Fitzroy Underground precinct.

This former no-go zone with its ‘Spiders From Mars’ feel sheltered the only remaining live music venues in the Zone – Totalled on Wellington Street and the cavernous Bullring, right above the Underground station itself, at the old intersection of Brunswick and Johnston Streets.

While Mango Mars served his musical apprenticeship alongside inner-city jam musicians and students from MUT, Desole and The Exit (whose in hindsight ridiculous stage name was an apparent protest at the sacking of The Edge from U2) both came from strict foodcore backgrounds.

Their subsequent culinary requirements forced the band to record this album in a way that not only had no negative effect upon the environment, but also somehow actually turned the music into food.

The LP was to be officially launched in private, at an exclusive after-dinner performance by the band, their first in eight years, supported by an apparently large rider request, which was, also apparently, later refused.

In any case, we shall never need to wonder what went wrong, or why, or how the public would have reacted to the album if it had been released, for it was of course deleted the instant it hit those imaginary shelves in Old Fitzroy, and sadly no trace of it remains, save this barely readable review. We shall never see the the likes of Chloro-5-substituted adamantyl-1,2-dioxetane phosphate again. CSADP.

That is extremely cool, Davey. A kind of internet performance art you made.

Thanks, Paul – only six to go!