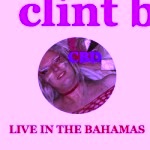 This Tribesco-only import (whose brief half-life might be summed up by the word ‘whatevs’) sounds a little bit like Davey Dreamnation’s Live At Budokan, only worse.

While words alone cannot convey the Clint Bo Dean Experience, a brief history is necessary. Born on the back of a postage stamp somewhere south of vaudeville, Bo Dean was an enigmatic noodle who rose steadily through the Glad Rap and Hand Core scenes, building a reputation as an eccentric and wayward xylophonist.

Two summers spent entertaining guests on P&O cruise ships in the early 1980s had no discernible effect on Bo Dean’s playing abilities, and it was at this time that he began to move away from his xylophone roots, experimenting with (and soon mastering) both the bush bass and the lagaphone.

His subsequent dismissal from his cruise ship contract left Bo Dean a ruined man, both creatively and spiritually. He began to experiment with cough mixture and developed an all-too-familiar fondness for nenish tarts.

None of this goes any way towards explaining the genesis of Bo Dean’s first breakthrough single, the unspeakably bad Private Poet, which was apparently penned during this creative nadir on the back of a clinker, and which will go down in history as ‘deleted’.

Clint Bo Dean’s debut album, Never Go Ashtray, suffered a similar fate, only in reverse. It was deleted and then released in 2010 before being deleted a second time, just to be sure.

That album’s track listing alone broke several Tribesco council ordnances, including an obscure 1823 zoning by-law banning the recording of chipmunk, cricket and grasshopper noises in situ. After being hauled before a magistrate on trumped up charges of lese majeste, Bo Dean was sentenced to a period in which he must remain incognito, ergo sum and obiter dicta notwithstanding (Cf.).

Clint Bo Dean spent the next fifteen years in cotton wool, shielding himself (and his two fans) from the humiliating spectacle of public irrelevancy. That Bo Dean maintained his silence in private speaks volumes about the truth of rumours that he had a straightforward case of Laryngitis. Which brings us to 2025.

Live in the Bahamas is a strange kind of ‘live’ album, resembling more closely the soundtrack to a live instrumental album composed not so much of songs but rather chipmunk squeaks and pule-laden sound effect collages, separated by bizarre soundless interludes and random mobile phone keypad noises.

Actually, there’s no way of knowing whether Bo Dean even appears on this album at all, or whether he has instead ‘phoned in’ his contribution from Uranus. The truth does not really matter in this case, however, as Live in the Bahamas did not even reach the pre-release stage.

It was in fact pre-deleted the moment Bo Dean (or whoevs) pressed ‘play’, on that otherwise ordinary day in 2025. Thankfully, we won’t have to wince at the memory of hearing it ever again.

this post contains so many inaccuracies I am not even going to bother responding to it.

I take it from your dismissive tone that you have not even listened to the album itself. “Live In the Bahamas” was not in fact a live album at all – it was the title of a promotional jingle I dreamed up one day on behalf of several Caribbean-based tourism and entertainment agencies. The album of the same name would not even have existed at all if it wasn’t for that. I also assume you have not had the pleasure of listening to my independently-released 7″ single, ‘Clint Bo Dean Is Really Cool’. Which is a pretty glaring oversight. Your final suggestion – that I myself somehow managed to delete the master tapes of the album – is breathtaking in its mendacity. You and I both know who wiped those files. If it wasn’t for that prickly llama of yours we’d both be famous by now. Instead, you’re counting down to your one hundredth release; and as for me, well, I’ve only just started.

I strongly resent that insinuation, Mr Bo Dean, and I can assure you that your critical view of Davey‚Äôs integrity ‚Äì and by extension, my own ‚Äì has set you on a collision course with rebuttal, my friend. It‚Äôs funny that you mention the countdown to DNRC‚Äôs 100th release, given the fact that there‚Äôs only two more to go, and one of them is mine.