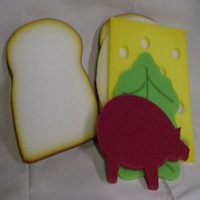 Singlehandedly reviving the ‘verboten’ black bubblegum genre, best thought of as what would happen if Ronnie Spector fronted Einstuerzende Neubauten, ex-Fashionistas drummer Madeleine ‘Peachy’ Kane took advantage of a clause in her record contract and put together eleven bleak, catchy, disturbing musical meditations that launched her screaming and shoo-bee-dooing into the public arena. Deftly interweaving up-tempo backing vocals with industrial grindcore backing and varying tempo from flighty to dirge, “Can of Ham Sandwich” presented Kane as an artist unafraid to look deep into the black holes that skirt the rim of the known universe, to risk obliteration by diving into the heart of those black holes, and to come out the other side with a handful of starlight. From the opening track, “Sexier When You Say It” with its uplifting existential middle eight stripped back to a single minimalist Wurlitzer line, to the aural feast of the penultimate “Don’t Make Me Repeat Myself” and the apparent wall of chainsaws, coffee-grinders and jackhammers sprinkled over with the bipping of a pedestrian crossing, COHS defies all reason by lodging itself in the memory in that subliminal way that will, even though on first listen you’d swear it was physically impossible, see you actually whistling along to it as it runs through your mind on the tram on the way to work. Hypermelodic and Uberindustrial, Kane’s about-face into the world of black bubblegum is the musical equivalent of Dianne Weist in Bullets Over Broadway when she grabs John Cusack’s face in one hand, wrenches his head around to stare her in the eyes and says, “Don’t speak, don’t speak, don’t speak.”