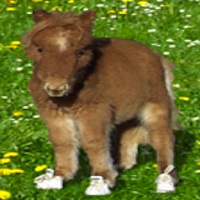 At the end of 2003, knowing full well that DNRC’s finances were, like Walt Disney’s head, in a state of perpetual suspended animation, and knowing also that the ability of small horses to sing and/or play instruments has never been proven or observed in the wild, Davey Dreamnation (in his usual dogmatic fashion) went ahead and signed The Guide Ponies as a rostered act, hoping to recoup some of the expenses larded out to help The Various Artists produce their basket case of an album. This appalling cassingle release failed to sell anywhere, even in the Thai market, despite the kitsch cover artwork, the song’s obvious allusions to Christmas and a film clip rumoured to have been shot on a budget consisting of a magnifying glass and two packets of Tic-Tacs. Thankfully deleted the moment its panic-attack inducing vomitalia and crass exploitation of animals became the subject of an expose on Media Watch, “Pony Stories” has attained a kind of cult status recently, having been covered by The Toilet Cleaners on their abysmal comeback album, “Into The Bleach”.