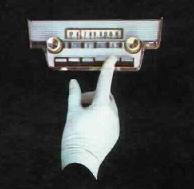 Back when The Weather were just Weather, their “Ragged Isobars” EP was released as a single but due to its length (both it and the b side, “Mechanical Island” clocked in at over ten minutes) was classed by anyone who cared as an overblown (albeit really exciting) EP. Then they released “Between Stations”, changed their name to “The Weather” and began experimenting with even more daringly extended releases, making “Ragged Isobars” sound like a blip-vert on the arse-end of Uranus in comparison. This quite batty EP clocks in at roughly eighteen hours in length, making it the most inaccurately named DNRC release ever. Title track and brave-minded opener “Between Stations” was recorded on an express train to Belgrave that, ironically, didn’t stop at any stations but, due to several tedious delays involving faulty switches, managed to take three hours to make what would normally have been a fourty minute trip. Unfortunately the second and third tracks featured here, “The Ghan” and “Indian-Pacific” took even longer to record, over several excruciating six hour takes. Closer “Indian Pacific (Slight Reprise)” was mercifully cut short at the five hour mark after it was found that none of the band members actually possessed a valid ticket for their onward journey. Their ejection from the train somewhere on the Nullabor Plains signalled the end of their career. Musically, they had been on the road to oblivion anyway. Peaking somewhere near the 1:23:35 mark of “Indian Pacific”, guitarist Noodles’ extraordinary guitar licks could carry on no more, and the band was left to fill in some extremely edgy silences therein with tin whistles, toot sweets and a two-hour extended Drkstixb solo. Long consigned to the dustbin marked “Sad and Deleted”, this musical oddity is best left gathering dust, where it landed.