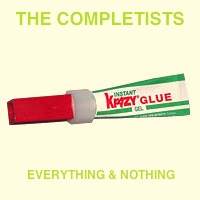 Trying to compile a best-of album on behalf of a band like The Completists may sound like an impossible task, and you’re probably right. Why Davey Dreamnation ever bothered to do so is anyone’s guess, but probably has a lot to do with the mild form of stupidity he has always been accussed of suffering from. The problem of course is obvious: if The Completists was a small child, instead of an incendiary rock band famous for its blistering live performances, one would have trouble finding that child a Christmas present, due to the fact that he or she already had one of everything – and probably a couple of nothings as well. Hence the title of this remarkable (though flawed) collection, which attempts to summarise a band known as much for its prolific release schedule as for the sheer number of tracks its members recorded but never in fact distributed terrestrially. It would be all too easy to blame Dreamnation for the latter; however given that The Completists were an independent band for the entirety of their recorded career – meaning that they ‘published’ their own songs on the rear-end of mix-tapes flogged from local op-shops – it’s hard to know just how much of a role anyone migth have played in the acceptance/rejection of each of The Completists’ album track listings. Perhaps we will never know. What I can’t understand is how this double album, which starts off reasonably well with the wailing early Japan-only compilation track “Snot/grass”, simply passes over The Completists’ first three albums entirely, pausing only for a moment to tip its hat to breakthrough fourth album Snail’s Pace (whose lead single “Get Off, Baser” can be found here, along with its criminally under-rated twin “Get On, Hootie”) before stumbling towards the end of Side A by way of “Stinks” and “Gravity Gravy”. Similarly, while it’s great to see Banshee Chipmunk represented here, it beggars belief that Dreamnation has seen fit to include only “Righteous”, meanwhile completely ignoring the true genius that is “Big Pixels”, surely The Completists’ greatest track. Indeed, one suspects Dreamnation has not even heard the EP from which that track – and three surf-twang instrumentals, all of which are better than “Righteous” – originally came. This unpleasant shortfall is only slightly made up for by the inclusion of both versions of “Soups” but by the end of the first of these two discs (is it the ‘Everything’ disc, or the ‘nothing’ one – who knows?) we’re left with the feeling that the next two sides might contain no music at all. Such is the sheer stubbornness and art-wankery to which Dreamnation ‘Enterprises’ (and yes, I use this word advisedly) all too often subjected the world, right towards the end there. Completists fans will be relieved to read, however, that the second half of this compilation does not quite blow chunks, and does at least contain some decent material from the latter period of the band’s journey towards self-destruction. Stand-out track and live staple singalong “Howling at Mars” appears here, alongside a half-dozen stone-cold Completists classics – I’m talking “Fuzz Bin”, “Serendipity Pill”, “Bogan Horse” et al – before the band jams itself right where it hurts on the half-hour drone of closing track “Closing Trax”. Just how Dreamnation persuaded himself to reserve one quarter of this compilation for a track that might not even have been recorded by The Completists is just beyond the scope of this reveiw. Nevertheless by album’s end we are left feeling that this sad and postmodern rubble-band were probably deleted at just the right moment. That is, the moment before Davey Dreamnation convinced himself to make this a three-disc compilation.

hey Dj Salad tosser, I am tagging you for the Super 8 meme. Get me!me med em me’d