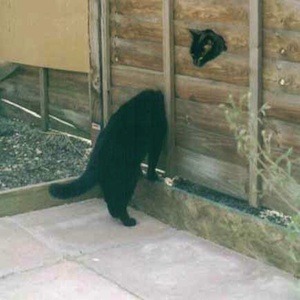 Having celebrated the occasion of the instant deletion of sixty barnstormingly barmy releases from some truly insane and troubled artists back in 2006, Davey Dreamnation began 2007 with an ironic stab at his critics, choosing to release this oddball song from a pair of complete nobodies, without even bothering to append a b-side to its sorry arse. While one would be forgiven for thinking that this is indicative of The In Jokes’ lack of musical talent, instead what we get on this thrillingly short song is a series of musical references dressed up as samples and made to run through the streets shouting “naked men!”. Within seconds of the initial botched count-in, itself a parody of Nirvana’s “Serve the Servants”, lead singer Maikiki begins reading out a list of previous [dnrc] releases, complete with release date, format and fate. Upon the first utterance of “deleted”, multi-instrumentalist Wu Gazer triggers some behemoth of a drum kick sample and we’re off on a journey through genre. Beatle-spec, thrash-mat, silly wobble, cool-op, frente-bait – they’re all here, as anyone even remotely familiar with the musical landscape of 2007 would know already. By the time Maikiki rounds off his list at the 1.25 minute mark, both the song and an era are over. Deliciously fundamental, archaically misspelt and frozen like an idea daquiri, “Yew’ll Never Bee Apart (of IT)” proved a prophetic statement of intent indeed. For upon this ridiculous song’s release it was emphatically and immediately deleted, though sadly the usual bootleggers and blog-kids somehow managed to leak its sonic drivel onto the internet and the rest, as they said back in 2008, will be history. We will never live to see their like before.