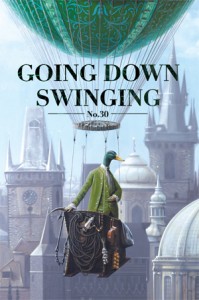 It’s the season for all things untold: flying ducks in balloons, a machine that plays Buddha and Europe’s “Final Countdown”. What’s he going on about? Well may you ask. And here’s one answer: I’m going on about Going Down Swinging No.30 – the special 30th anniversary edition.

Featuring drop-dead untold cover artwork by Katrina Rhodes, this special issue of Australia’s most innovative literary print journal has some pretty cool specs (as we say in the industry): 172pp Book + 2 Spoken Word CDs & Colour Graphic Novella. As I said: untold. But why take my word for it? Here’s the official word from GDS:

Founders Kevin Brophy and Myron Lysenko and past editors Grant Caldwell and Adam Ford join editors Lisa Greenaway, Nathan Curnow and Ella Holcombe in selecting new works of short fiction, poetry, comic art, haiku and haiga for this commemorative edition of Going Down Swinging. A bumper issue featuring 172 pages of new works from writers and artists in Australia and around the world.

Through the support of Arts Victoria, GDS has also commissioned for this issue a new short story by Paddy O’Reilly, a longform poem by Eddie Paterson, and a full-colour graphic novella by Michael Camilleri.

So what’s this all got to do with Europe’s “Final Countdown”? Well, as you may have noticed, I was roped in as spoken word editor (Europe) for this issue, and I’m pleased to say tracks by four Europe-based artists have made it onto the international spoken word CD-component, namely: Tsead Bruinja (who writes and performs in Frisian and Dutch), Anna Arov (who writes mostly in English), Ajo (who performs in Spanish) and Gu_rún Grændóttir (who, contrary to your expectations, performs in French). I was asked to provide an editorial for my selections, and here’s what I came up with:

For me, ‘Europe’ always used to conjure up the hair band of the same name. Then I started watching Eurovision and realized it was worse than that: Europe was a cringe-worthy parade of pseudo-pop, watched by millions from Iceland to Albania and Ibiza. Even more alarming, the EU was just a throwback to New Order, while Schengen Visas were a criminally underrated noise-core outfit from Gdansk.

Having lived in the Netherlands for the last two and a half years, I remain none the wiser. This corner of Europe is populated by people who, when they discover you’re Australian, make jokes about yoghurt (you know, even it develops culture after a while) and convicts (always a favourite!), while maintaining a deep reverence for Steve Irwin and whoever decided to hire Guus Hiddinck.

The four tracks I’ve selected for this CD – in English, French, Dutch and Spanish (sorry, Esperanto lovers) – cannot truly represent the variety of spoken word that is being performed across the continent, but they do hopefully dispel the notion that Europe speaks with one voice. From “reality” and DNA to red apples and nylon stockings, these pieces speak to the creative fusions made possible by history.

But what about Buddha? you may be asking. Frankly, I’m surprised you’re still here, but the truth of the matter is that Canadian spoken word editor and mango-lover Ian Ferrier also chose a live recording of my track “That’s Buddha” for inclusion on the same CD. I’m really chuffed that Ian saw fit to include this track, which was recorded as part of le Festival Voix d’Amériques in Mon­treal in 2009. The performance involved two Buddha Machines and me, and was recorded on Wednesday 11 February, 2009 at the Casa del Popolo. If you’d like to hear what two Buddha Machines sound like, you’ll have to buy the CD. Or else, you can check this out.

I’m sad not to be able to make it to the official anniversary untold spinning machine with strobes GDS launch party at the Melbourne Writers Festival, but I just know it’s gonna be huge. If you’d like to put your money where your mouth is and support fine Australian writing and spoken word, mosey on over to the GDS shop, where you can purchase copies of GDS 30 online at a special discount rate.

thanks for the post and for your contribution to No. 30. The gentleduck is flying your way and will arrive very soon.

yours (in deafening quackness)
nathan

I would like to exchange links with your site daveydreamnation.com
Is this possible?