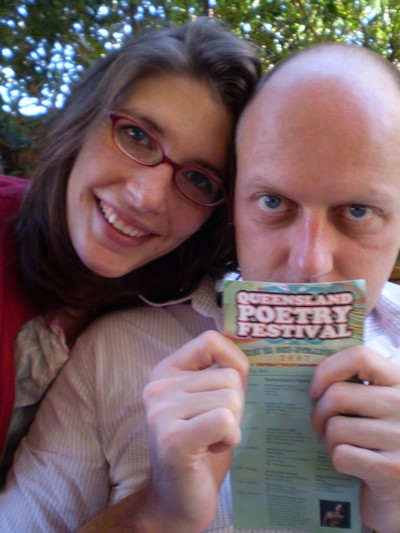 I’m kicking myself that I didn’t take the opportunity while I was in Bris Vegas to grab one of the posters for the Queensland Poetry Festival, in which I was lucky enough to take part. Still, I did manage to grab a copy of the festival program (cue image, left – featuring my escort for the weekend, the divine Miss Kat), as well as checking out some cool poetry talent, rubbing shoulders with the famous and not-so-famous, eating Himalayan food, sharing an apartment with Matt “Not the Guy from the Full Monty” Hetherington, ranting about haiku with Myron Lysenko, experiencing the delight that is Brisbane weather in the spring time, and suffering a bizarre attack from a spider inside a tent while camping on Stradbroke Island. Ah, Queensland – what’s not to like? Actually, don’t answer that one. There’s plenty not to like about any place. On the other hand, Brisbane is a damn sight more interesting than it was the first time I went there, in the late 1970s, to have a fragment of an earplug wrenched from my ear-drum. Youch.

Some festival highlights for me included:

a) hanging out at the Alibi Room in the Valley (or is it on the border of New Farm) for the pre-opening night drinks, where I was asked if I was Paul Durcan, the sixty-something Arts Queensland Poet-In-residence who hails from Ireland and probably looks just like me (I never laid eyes on him once). I also met some interesting poets that night, including Canadians Jacqueline Turner and Matt Rader, Bris Vegans Graham Nunn and Julie Beveridge, Hobartian Lyn Reeves and fellow-Melburnians the afore-mentioned Hetherington and Lysenko.

b) catching a Rivercat from New Farm to Regatta and marvelling at the sight of a river that’s, like, navigable, and able to be used as a means of transport. Extra bonus points for the infomercial TV display service thingo which actually showcased (in between star signs, theatre listings, wacky news items and celebrity trivia) some poetry by poets attending the festival. Respect! And for $2 something, a total bargain.

c) opening night at the Judith Wright Centre featuring motor-mouthed Shane Koyczan, J Tranter, David “Ghostboy” Stavanger and others on a massive stage in a massive auditorium with a kick-arse sound system the Babble crew could only dream of.

d) hearing Steve Kilbey rehearse in the apartment next to ours. Like, wow.

e) watching from backstage as Maiden Speech rocked the house on saturday night as part of our double-billed gig entitled The Library of Wigs. I was nervous as all get-up and their rocking 1980s-fuelled set enabled me to practice my tai-chi moves backstage and generally chill the hell out before walking out into the bright lights.

f) walking out into the bright lights and almost cracking up mere seconds into “That’s Budda”, after realising that the sound of the two warbling Buddha Machines being pumped through the stadium-sized speaker stacks had been enough to make several audience members start laughing. When you haven’t even got to your punch line and they’re already laughing, truly, you can do not much wrong except forget your lines a few times. And that’s also Buddha.

g) getting through my 25 minute set without stuffing up too badly. I had a chat with Crazy Elf that afternoon in which I’d observed that “25 minutes is a long time to die onstage”, to which he responded “Yeah, but it’s a short time to kill.” Thankfully, the vibe was more at Crazy Elf’s end of the spectrum and I got some good responses to old favourites including “Dubbo Boy”, “That’s Buddha” and “Private Poet” with more bemused reactions reserved for “America”, “Three Haiku SMS”, “Ken” and even more muted feedback for “The Sprawl”.

h) getting hammered in the post-gig aftermath, featuring too many vodka shots and quite a few rants. Enough said.

i) emerging relieved into the Sunday morning sunshine to realise the hard work was done, and that the official Soi 3 launch would be a cakewalk. Nice to see some old friends there, and to hear Margie, Nathan Shepherdson and Luke Beesley read. I think we even sold a few books.

j) heading off to Stradbroke Island for two all-too-brief days of camping and relaxing with my super-lekker escort, Miss Kat. For those who haven’t been to Straddie, it’s a kind of down-home version of a Queensland holiday island, half an hour by ferry from Cleveland, with long white sandy beaches (note to parks and wildlife: major erosion happening here), some nice camping grounds and a Bowls Club where you can get cheap roasts on a Tuesday night. Indeed, as I hadn’t really organised anything in the way of victuals for the trip, we ended up spending quite a bit of time in said Bowls Club, where Kat had the thrill of seeing her first Aussie couple with matching stubbie holders in the wild.

k) not so much a highlight as a Steve Irwin style encounter: enjoying a relaxing vodka shot in the confines of our tent on a very windy night only to discover a large black spider descending via its web between us onto the airbed, upon which Kat tried unsuccessfully to leave the tent, drinks in hand, having forgotten to undo the complicated series of zippers designed to keep said spiders out. Cue Indiana Jones music as Davey escorts Kat from the premises, reaches for thong and delivers death blow to spider before brushing it out of tent and into camp ground, where Kat administered completely unnecessary but understandably vigorous further death blows. Episode ends with Kat musing aloud about how spiders always come in twos, before falling asleep, leaving Davey to contemplate further arachnid raids for the rest of the night.

l) finally packing up to leave the Smart State for southern climes, only to find that there was no way I could take the weather with me. So maybe Crowded House don’t know everything after all, hmmm?

what a great adventure, was looking forward to seeing you to hear all about it…. but now that I’ve read it online looks like there’s no need for that now! unless you have some bonus tracks up your sleeve?

yeah, there could be a couple of out-takes lying around on the studio floor.