Never thought I’d use these four ‘terms’ in the same sentence but there you go – if life was a Venn diagram, there are several shaded areas in which me and neenish tarts would intersect.

For those who’ve been living under a rock for the past century or so, a neenish tart (see picture above) is a delightful Antipodean invention featuring a pastry base, jam and cream filling and distinctive, two-coloured, almost-yin-and-yang-style icing. It’s the kind of cake you’ll find in any halfway decent country town bakery, and one that (courtesy of my mother’s fondness for them) I’ve developed a fair hankering for over the years. Matter of fact, I could murder a neenish tart right now.

Anyway, where was I? Oh yes, Wagga Wagga. It must have been over a year ago that the Booranga Writers’ Centre in Wagga Wagga, Australia (publishers of the magazine FourW, in which I’ve had a few pieces published over the years) put out a call for poems to be displayed on bus shelters in the town. The call for works immeditely ‘piqued’ my interest, as we say in the industry, as I’d spent a fair bit of time in Wagga Wagga as a young grasshopper, either driving through or else strapped into a dentist’s chair.

While my memories of Wagga are not all fond, I wrote three poems and sent them off. The first one (brace-face) was about getting braces in Wagga Wagga. The second one (“Riverina”) was about playing Aussie Rules in Wagga. And the third poem, the one they accepted, was about a neenish tart. It’s called, surprisingly enough, ‘neenish tart’, and for the benefit of all non-residents of Wagga Wagga, I’ve pasted it below:

There used to be this cafe around here
somewhere – maybe it’s still going, do
you know the one I mean? You could buy
a good neenish tart there, with inch-thick
pastry and an ooze of too-sweet jam. Then
there was cream they must have laced with
sugar and icing to die for. I used to live in a
town to the north of here, it doesn’t matter
which one. What matters is the neenish tart,
the one my mum used to buy me whenever
we drove through Wagga Wagga on our way
home from time trials or footy, it depended
on the season. That tart always tasted good.
I especially loved the icing, it reminded me of
yin and yang. I wonder if it’s still there. One day
I’ll come back and walk down the main street,
ask a few people if they remember the place.

The sentiments in this poem almost make me feel a little bit teary now – I remember the taste of that neenish tart as if it was yesterday. Recently, I got an email from Derek Motion, the director of Booranga, informing me that

” … the second groups of poems will be going up shortly in bus shelters around Wagga Wagga. We have been able to procure an extra 4 shelters to use for the project, so all 8 poems will be on display at the same time. To celebrate this event we’ve planned another event – a bus tour of all (or selected) shelters, featuring poetry readings on location, with wine / refreshments at the terminus. We will be holding this event on Saturday 14th April, with the bus departing from the Wagga Council Chambers at 2pm.”

While I unfortunately won’t be able to make it to the launch, the idea of a bus tour sounds like a great one and I really wish I could be there. As a kind of substitute, Derek sent me this photo of the bus shelter where my neenish tart poem is currently living. 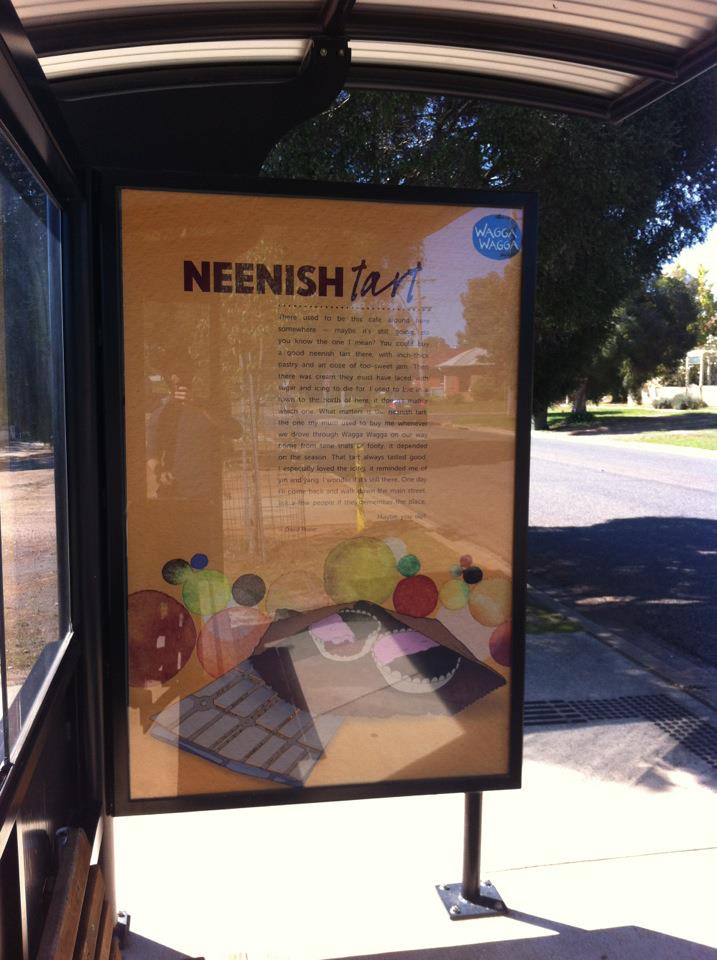 Love it, Davey! They should break out the neenish tarts in your honour when they get to your stop. 🙂

Sounds perfect! Throw in a piping hot cream bun and I may just try to get there …

That is so cool, is Derek send you a poster? I love guerilla poetry, installations strategically placed to subvert the day walkers.

Acually, Mark, I have no idea – but assume it would be a pretty kick-arse big poster in any case, by the looks of that photo …

Some pretty superior looking tarts in that first photo, practically home made ( can you guess that we are also fond of a good neenish?).
Nice to see the bus stop too 😀

Show me someone who’s not fond of a good neenish tart, and I will show you someone who has never really lived 🙂

No-one seems to know what ‘Neenish’ means. Correct me if I’m wrong!

Well, I certainly have no idea! All I know is that they taste great. 🙂