Heh, heh. Well, not really. But in the spirit of Spike Milligan, one could say that the last six months, during which I’ve been working at the Stockholm International Peace Research Institute (SIPRI) as an editor, have well and truly opened my eyes to what’s goin’ ahn in this crazy, mixed up world.

Before I started work at SIPRI, I’d had a few editing jobs, but for the most part I’d been the only editor, or at least the only ‘native speaker’ (don’t get me started on how much I hate this term) in the office. The big difference now is that I’m part of a larger team of editors. The obvious benefit of this arrangement is that my work is checked by other (read: more experienced) editors; as a consequence, my work improves.

It’s also been interesting to rediscover my inner pedant, especially when it comes to fascinating questions of punctuation. I used to be a real ‘Hyphens, n-dashes and m-dashes? … meh’ kind of guy. No longer. I’ve even caught myself adding chevrons to URLs in non-work-related situations (and I also suspect my hyphen usage just then could have been better). 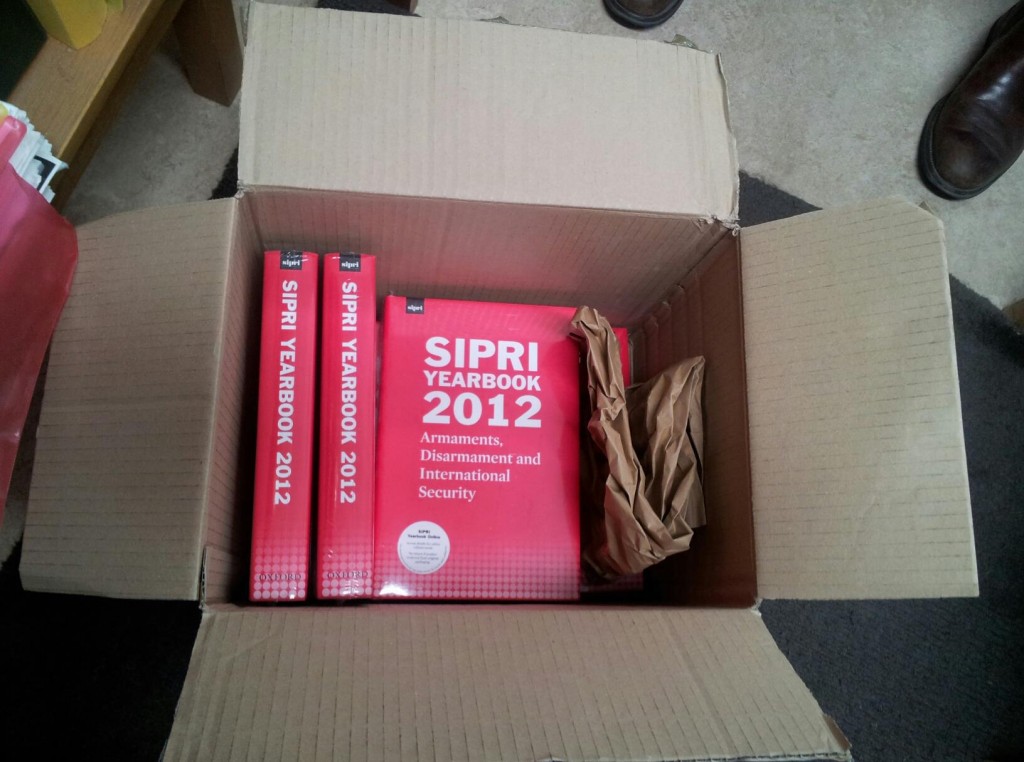 Anyway, enough about me (oh, but one last thing: colons vs semi-colons? … ah, whatever). This post was supposed to be all about SIPRI Yearbook 2012 and its part in my downfall but since (like Elton John) Iiiiiiiii’m still standing, I guess I’ll just have to take another tack.

I can safely say that the Yearbook is the biggest and most sophisticated publication I’ve ever been involved in putting together, and that being one of its editors has offered me a brief glimpse into the amount of effort it takes to produce an annual compendium of the world’s military spending and other assorted hi-jinks.

I may sound like a spruiker but its absolutely chock-full of factoids, and most of it makes for pretty grim reading. Here’s one factlet FYI, and just to whet your appetite:

World military spending in 2011 is estimated to have been $1738 billion, representing 2.5 per cent of global gross domestic product or $249 for each person alive today.

Makes you think, doesn’t it?

I wish I could read more than the summary of it. It’s a whopping 100£, and I guess that no matter how sophisticated this edition is, not a lot of people interested in it (like me) would be able to get the chance to learn from it. Especially with this crisis. 🙁
It seems like you have a lot of copies though.. hmm 🙂 nah, I’m not really hinting at anything hehe. I’ll stick to the summary 😀

thanks very much for your comment. I totally understand your concern about the price of the Yearbook. However, there are several ways to access more information than is available in the summary version. If you visit the SIPRI website page for the 2012 edition, for example, under each chapter you will find a sample PDF of at least one full section. I know that’s not full access but there is some information there. You can also access data on the largest military companies, the top exporters and importers, and totals for world military expenditure. Also, older editions up to 2010 are freely available as full text PDFs as well. I understand that’s not as good as full-text access to the current edition—I’m not sure where you live, but it might be worth contacting your local city or university library to see if they have either a print copy or access to the online version. Pretty much everything else we publish is available for free download via our site or on our Scribd page. Sorry I can’t be of more help than that!! 🙂