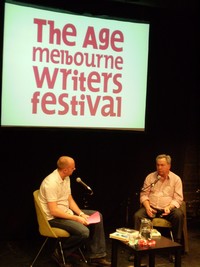 My conversation with John Tranter at the Melbourne Writers Festival was a surprisingly pleasant and interesting affair. I say surprisingly because I was nervous as all get-up beforehand – due mostly to the fact that for me, John Tranter has always been a somewhat larger-than-life figure. I studied his work in the early 1990s, at a time when his first Selected Poems had been around for about ten years, and he’d just released Under Berlin and The Floor of Heaven. Some might say this was the peak of his career and yet he’s gone on to write a ton of new stuff, culminating in last year’s Urban Myths: 210 poems, which won a swag of prizes and accolades.

So, you might say I was slightly nervous about interviewing John at the MWF, given that he’s such an important (if not imposing) figure in OzLit and, well, I’m a minnow. However our brief conversation in the Green Room (God I love the Green Room) before the interview left me feeling slightly more optimistic. I found him to be charming, friendly and willing to talk about most things I wanted to talk about, including John Forbes, drugs and the Internet. I mean, what else is there to talk about? So, we headed upstairs to the Tower Room in which probably about thirty people had gathered to listen to the interview and we just got on with it. Not, however, before a festival staff member came up to me and asked: “Are you John Tranter?”

As it turned out I would be asked this question a second time later in the afternoon, apparently because I was wearing a festival guest lanyard. To top it off, two weeks later at the QPF in Brisbane, I was asked if I was Paul Durcan, a sixty-something Irish poet of great renown. Was there something more significant in these two cases of what Delta Goodrem might call Mistaken Identity? Had I unwittingly joined the vanguard of modern poetry by agreeing to act as ringleader in the interview with Tranter? Or did I really look as if I was in my sixties myself, weighed down (or liberated) by several decades of writing poetry? Who knows.

In any case, looking back on the questions I wrote down for the interview, I can see that while they were all scripted, we actually danced back and forth across a number of topics, with each of John’s responses triggering or prompting a diversion from the original order, so that the conversation weaved in and out of many issues including the question of urbanity, what kind of bird John Tranter might be (no definitive answer there), the question of performance, the importance of New York City to his life and art, how many poems the maintenance of Jacket has robbed him of writing (current tally: 53) and, of course, John Forbes and drugs.

This issue was especially interesting for me as Forbes wrote a poem called “Tranteresque” in which he pictured an idyllic island getaway featuring loads and loads of quality cocaine, babes and various kinds of alcohol. I read Forbes’ poem out as part of the interview (Tranter himself declined to read it) and then asked him what kind of rhetorical role drugs played in his writing. His response dealt with the drug culture of the 1960s and the difference between poetry written on drugs (hello Michael Dransfield) and poetry about drugs (hello, ehm … ). He then admitted that he had taken Mandrax (methaqualone) at one time and had had some kind of hallucinatory epiphany in writing. The next morning this turned out to be words to the effect of “Round and round we go …”, a line from a popular children’s story of the time.

So much for Tranter the drug-addled opium-eater then.

What struck me most about the interview was the way in which he was able to anticipate the flow of the conversation, so that it all eppared seamless and natural. At first I thought this was due to my own efforts in trying to steer the conversation in specific directions. Later I realised however that these conversations are like a well-played hand of 500. The smoothness of the flow of tricks depends upon both partners playing to each others’ strengths and weaknesses: I’ll play a low trump here so that you can use your bower; you’ll lead a low trump back at me so that I can execute my joker; here’s a throw-away five of spades just to play with our opponents’ minds; and so on. Positively, the Q&A was over long before I wanted it to end; John then read some poems including his poem for Forbes, “God On a Bicycle’, and after a couple of questions from the audience it was all over.

As we were heading out, another festival staff member came up to me and asked: “Are you John Tranter?” Though I replied in the negative, I now wonder to what practical use I could have put this case of mistaken identity. A few autographs at the book stall perhaps? Or maybe a couple of Mandies, washed down with a gin and tonic, just to take the edge off things.

What does Mandrax do, anyway, apart from shorten itself agreeably (like Rohypnol, really.) Still, it would be rather fun to forge some autographs.
Thanks so much for putting your account up, David, I feel less left out now, had to pass on the Tranter session as it was Farver’s Day and all that. The analogy with 500 is a beaut.

I think they’re some kind of sleeping pill/ sedative, still huge in South Africa. Not sure about the hallucinogenic properties – damn, I wish I could remember my Year 10 science, we learnt all about it back then. Still, doesn’t sound like a great deal of fun to me.

Hope your Fathers Day was rad!