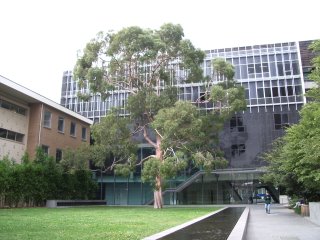 This magnificently-crafted construction, located within the grounds of the University of Melbourne, demonstrates the breathtaking potential of modern architecture, a topic upon which I have recently had occasion to reflect. The smooth, elegant and organic lines of this mysteriously artistic building remind me somewhat of a gum tree, with its attendant leaves, bark and sap. The intricacy of the “branches” elevates the entire structure to a cosmic plane, its swooping lines and fractal geometry spell-binding in their artistry and grace. Over one hundred years in the making, this building was apparently designed to keep growing until it falls over, a somewhat cheeky irony on the part of its architect. Surrounded as it is by glass and steel, this building also speaks of a new renaissance in architecture, one in which the natural world is allowed to thrive, and where the improbable decisions made by nature are deliberately fused with the perhaps more advanced methods of suspension and disbelief. One of the greatest beauties of a building like this (and surely one that should be pointed out again and again to money-grubbing governments and institutions) is that it costs virtually nothing, being self-replicating in its materials and form. It also (uncannily) provides shade and creates a natural ampitheatre at its base (although the building’s susceptibility to lighning strikes, in my opinion, warrants some sort of lighning rod being installed on the “roof”). The synergies between nature and man-made objects are further enhanced in this instance by the curious tendancy of the local birds of sitting in the branches. While the number of staff housed in this building remains unknown, the potential for space-saving through the widespread construction of these kinds of edifices confounds the imagination. Its architects (and the university administration) are to be congratulated for bucking that trend towards enclosed, right-angled and box-like structural design that haunts our every city, and choosing instead to build an open-planned, sunlight-induced monument to this great continent and its floral diversity. Impeccably crafted, moody and transparent in its yearning, this extraordinary brain-spasm will hopefully stand for years to come as an example of bravery, courage and consternation. I hereby name it eucalyptus designus. Thank you for your attention.