The new University of Queensland Press poetry anthology, Thirty Australian Poets, is out now and features, well, thirty Australian poets. The anthology has been edited by Felicity Plunkett and while I haven’t actually received my copy yet, I’m kind of thrilled to know that I’m in it and curious as to just who else is hiding away in there.

The blurb for the book on the publisher’s website states:

1968 marked a turning point in Australian poetry, when a dynamic wave of new poets sought to revitalise a ‘moribund poetic culture’. At the helm of that generation was John Tranter who argued that there would be cycles or generations of poets with peak moments where new poets would emerge to revitalise the culture.

Thirty Australian Poets is the first anthology to celebrate the generation of poets born after 1968 and includes a wonderful diversity of voices and styles, from re-imagined versions of traditional forms to the experimental and avant-garde. This groundbreaking anthology captures the spirit of an exciting generation who, between them, have won every major poetry award, and made the renaissance of Australian poetry impossible to ignore. 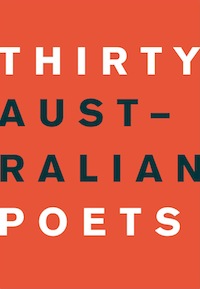 I think it’s a very interesting premise for an anthology – and it’s also a relief to see no mention of the word ‘best’ in this blurb – but I suspect some people may have a problem with the ageist cut-off date! Again, I haven’t seen the anthology yet (I presume it’s winging its way slowly northward as I type this post) and so I’ll be very curious to see just how representative it is of my so-called generation.

In a sense, any anthology’s premise is going to be a loaded one, and I personally am not a huge fan of generationalism in any guise. However, I also suspect that the use of the term here is slightly tongue in cheek and also deliberately provocative, as Tranter’s The New Australian Poetry (1979) perhaps was. In any case, it’s nice that Felicity selected five of my poems – ‘Sun­bathing’, ‘Oz’ ‘Lady Land’, ‘Lurker’ and ‘A821.4′ – for inclusion in the book, particularly as the first three of these are from a manuscript (Leaves of Glass) that I am beginning to think will never be published.

This is, I think, the unspoken truth about the current so-called generation of poets, in that for every anthology that’s printed, maybe a dozen quality collections by emerging or lesser known poets fall by the wayside. While this is a bittersweet truth, it’s still great to know that at least one publisher is willing to showcase poets that the general reader may never have heard of, and I can’t wait to delve into it and discover the works of my faraway peers in a new and hopefully vital context.

Congratulations, will definitely grab a copy next time I’m in a real bookshop. The unspoken truth? I think we have some exciting times ahead of us.

Congrats! Like you, I have seen it, read about it, but am yet to pick up a copy. I think it is a great premise for an anthology. That said, there seems to be so many anthologies being published at the moment, so I hope this one is not overlooked. And I totally agree about the ‘bittersweet truth’… I hope that the rush of anthologies slows soon and the individual collection has a bit of a comeback in the publishing world.

Me too, Graham – and I agree that this one is a nice premise (as opposed to ‘ozpo since 1788’ for example). Hope all is well in sunny Brisbane, and thanks for your kind words!