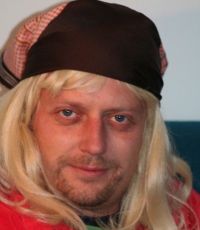 The last known image of Mead, taken shortly before his death (source unknown).

Mead (1972–2018) was a musician and performer whose medieval sound worlds drew inspiration from a variety of traditional musical genres. He is best known for his second album, The Mists of Thyme, in which his trademark sound, produced using the Drkstixb, an impossibly complicated and unpronounceable instrument that Mead designed and built himself, shines through. Mead has been described as 'a medieval superstar'.

Mead first came to the attention of the public in the late 1990s as a busker performing in Melbourne's Bourke Street Mall, where he quickly established a fearsome reputation as a raconteur and showman. Within months of his 'arrival', his Middle Ages-infused demo tape came to the attention of Davey Dreamnation, who had apparently been looking for new acts to feature on his DNRC Records label. Seconds after hearing the tape, Dreamnation offered Mead a four-album deal.

2004's The Mists of Thyme cemented Mead's place in the liturgical pantheon, straddling both the Middle- and Late-Middle Ages and introducing a new generation of listeners to the Drkstixb's unpronounceable delights.

The eccentric Onza Rocku had been scheduled for release in 2005 but, due to Mead's punishing tour schedule, was held back until the 2006 Commonwealth Games, to ensure maximum indifference.

Just seconds after the deletion of Onza Rocku, finally starting to get the hang of record industry negotiations, Mead and his cohort (including his Chilean backing band, The Voodoo Chiles) announced in an emergency press statement their intention to record a fourth album, Straight to Drkstixb and, in doing so, technically meet all of the contractual obligations outlined in Dreamnation's original four-album deal. It is now believed that a last-minute peace treaty was actually struck between Mead and Dreamnation, with members of The Guide Ponies acting as arbitrators, calling off the potentially explosive recording process.

Dropping in just on the leisurely side of six-hundred earth-shattering minutes, Teh Plague, while not as unlistenable as the never-released Straight to Drkstixb, was finally released in 2019, just six months after Mead's untimely death.

Having waited almost 20 years to see his magnum opus, Teh Plague released (and then deleted), Mead died on 1 April 2018, reportedly from gunshot wounds. His body, as well as his beloved Drkstixb, were cryogenically frozen and stored at Camp Davey, in the hope that Resolution DDN01 will someday be revoked.