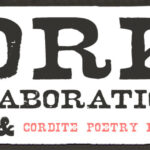 Our collaboration became the first of what would become known as Fusion, a new online series features collaborations between Prairie Schooner and interesting, innovative online literary entities from around the world that seek to create dynamic fusions in literature and art.

Illustrations were provided by Michelle Ussher and Watie White.

In addition, the feature included interviews with Derek Motion, Jennifer Compton and Nance Van Winckel, plus eight more interviews on the Cordite site.