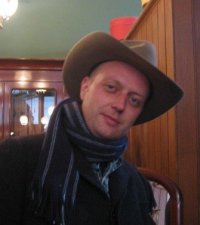 G’day mates, Davey here again with just a few of my most recent thoughts, right off the top of my Akubra, about social networks, being cool and all that stuff. Because I know that some of you are just a little bit confused about what it all means. So, for your reading pleasure, I’m going to answer, as well as I can, that perennial question, as well as a few others. And while some of you may dismiss my musings as the demented rantings of a cocky with a few too many loose bits of gravel in the top paddock, that doesn’t mean that I’m the only one thinking these things. In fact, from what I can gather, pretty much everyone in Australia with an email account is now facing the ultimate choice: do I become a member of Facebook, and ‘re-connect’ with my long-lost pals, or do I stick with Myspace, and sign up KRudd or The Howard Government (THG) as my “friend”? Do I hear a “WTF”? You bet I do! Strewth.

Now those of you who know me well would already be familiar with my tendancy to seethe on important matters of state, and to then set down my thoughts as clearly as I can on this new-fangled Intranet, so that my fanbase out there in the country who are still on dial-up can share these thoughts with me, or even interact with me via this terrific new-fangled thing called the comment function, which as far as I can tell was invented by Telstra ten minutes ago, just so you and me can share a virtual tinny and complain about the lack of rain, although we did get a few points out on our farm this week, but not enough to sow the canola. But don’t get me sidetracked.

The thing that really gets up my sherbets about these flaming city folk is not that they don’t understand what life is like on the land, although you’d be right in saying that I’ve had a gutful of these so-called pollies coming out here and donning the Akubra, just so they can look as authentic as me. No, I can handle all of that, in fact the Akubra factory has done pretty well out of me since these blowflies started coming out here to look at what’s left of my dams – you know the wife’s got this giant hat stand in the hallway that’s jammed with Akubras so there’s more than enough to go around every time THG or that new kid and his bald pall come out to visit. As long as they bring some cordial for the kids and remember to use the half-flush on the torlet, it’s all okay. The cheques don’t hurt either.

No, what gets me about these ignoramuses, excuse the French, is that they wouldn’t know their arseholes from breakfast time when it comes to computers and the difficulties the man on the land has when it comes to the emails, the websites and the online banking conundrums. Because I still remember the day when we used to drive into town, only about thirty clicks mind you, to visit that little old thing of the past called a Post Office, and do our mail and banking business right there and then, followed by a couple of potato scallops at Aussie Eats if it’d been a good year, and the flamin’ stock ‘n station agent hadn’t jacked up the price of Roundup, or else a packet of clinkers if the drought was running rings around us cockies.

Now before you start jumping on your city high horses (what we used to call motorbikes but seemingly you city kids prefer the term ‘scooters’, well don’t get me started on that, just get a flamin’ quad bike if you’re serious and then come and see me), let me say that I’ve done my time, signed up for the odd CWA HTML course, even dabbled in a bit of PHP and XML (no Bingo, that’s not the fertiliser, it’s called computer lingo). That’s all ridgy-didge, all a-okay, and yes, it sure beats talking on the party line like we used to when the local exchange was run on the smell of an oily rag, back in the day. I’m au-fait with the modern world, and am even considering installing a DSLAM in our brand new exchange, just so I can have the computer read stuff out at me. Not a problem in the world. All part of life’s rich tapestry.

What really gets me seething so much that I’m frothing at the mouth is that these so-called technologically-literate clowns just can’t accept that we country folks have our own social networks, and couldn’t give a flying rat’s arse about whether THG or KRudd is on Myspace, let alone LinkedIn and now Facebook. It really makes my blood boil, to the point where I could virtually drop a teabag in it and fix myself a nice cuppa from it, if only I wasn’t dead by that stage, what with the technical impossibility of inserting a teabag in your vein, though I have tried. I’ve also tried the online thing, set up my own blog back in 1976 before the technology was even invented, just had to wait about twenty odd years before the rest of you city slickers saw the light and cottoned on.

You see, in the end, we’re smarter than you bean counters give us credit for. Youse couldn’t organise a chook raffle in KFC while we’re out here, on the land, growing the stuff that makes your cafe lattes. It’s called milk, Bingo. My blog was one of the first farm blogs (or farlogs) listed on Blogger, but I soon tired of that, and so I got myself onto the Myspace thing, and even got myself about a hundred and something friends, before I tired of that too and looking for something to do I signed up for LinkedIn, only I had to wait until the end of the last drought before anyone sat up and took any notice. Finally, about a week ago, I got one of these emails landing square in my cocky’s inbox and what do you know, another flamin social network thingo, called Facebook.

Let me tell you, having been around the block a couple of times since your granny was knee high to a three-cornered jack, you might think it’s all brand new but the world’s always had its fair share of social networks and busy cockies like me sure as eggs don’t need another one of these things to waste our time and clog up the inbox with third party applications and munny and whatever tommy rot you want to throw at us! It’s getting so that when I take the laptop computer out to the shed to get on with the business of being a farmer I can hardly lift it for the bullcarpet that’s somehow got inside the mainframe. That’s more computer lingo, Bingo.

I mean, what’s a gymkhana but a social network? Or a Saturday afternoon piss-up with the boys down at the hotel, in the good old days anyway, before the Yanks and Singaporeans started buying up all the farms left lying dormant since the last drought really kicked us in the guts, and the Post Office’s long closed down and the school’s gone too and where are all the young folks? Learning computers at TAFE instead of wool classing, moving to what they now call ‘regional centres’ but in my day used to be called ‘towns’. What’s the use of having a team to support except as a social lubricant at the after-game BBQ, or someone’s dux ball? It’s all bloody networks, I’m telling you, all the way down to the mothers’ group and the various Christian religions. All of it!

The point I’m also trying to make is whenever I try to tell my cocky mates about the computer thing and how many new social networks there are in it, they just kind of shrug their shoulders and, without moving their lips, mutter stuff about timewasting and casting nasturtiums on my sexuality. Even when I pull out an ATM slip and explain how it tells me just how many clams I’ve got in the bank they’re unimpressed and tell me to rack off. Well, I’ve finally come to the limit of my patience and it’s time to say sayonara to all that. I’ve gone into the computer and told it I don’t wanna be involved in the Myspace thing anymore. I guess the final straw that broke the stone rolling down my back and gathering moss was hearing about THG and his bunch of clowns and KRudd and his bald mate had signed up for Myspace, as if catching on years after something’s gone down the torlet is going to win them votes.

As far as I’m concerned they can stick it up their clackers and I for one sure won’t be hanging around the Myspace campfire for a chat with my local members, Akubra or no Akubra. Some friends they’ve turned out to be, with the country people in tatters and our communities in ruins, any chance we had at reconciliation with the original people long gone and the social alienation that followed, that they’re now pretending to fix. The funerals for kids who’ve driven in front of trains now outnumbering the weddings and christenings, and the churches closed down as well. Yep, even God’s gone and deleted himself from Myspace, and yours too. Call me old-fashioned, call me what you will but don’t call me a friend, THG, and no thanks for the frikkin TV ads, your grand ideas for rejuvenating the heart and soul of what we used to call our country but it was never ours, or yours, or Telstra’s.

Anyway it’s all gone to the dogs now. No use inviting these recent arrivals to come out here, now they tell us we can’t even trust the doctors and I ask you, when did you last trust a single word that came from a pollie’s mouth, and what exactly was it they said? Something about the social fabric of the nation? Yeah, youse all think we’re just a bunch of racists but when was the last time you invited a stranger into your house JHo? Yeah, that’s right, you seem to think you get to choose it for everyone. You really are up yourself. The wife was right to tell you and your corporate banker mates to clear off before I set the dogs on you. One final piece of advice: the next time you and your North Shore ministers come slumming out here in search of a photo opportunity, why don’t you bring a bit of rain with you, or a decent conversation, or a bit of hope? How hard would that be?

Because until then, there’s not a hope in Hell that you’ll be coming back to my space, or seeing a look of recognition on my face. Book yourselves in for a night at the nearest halfway house for dropouts and then come back to me and bang on about your broadband networks and how linked in you are with everyone and your relief packages and mateship. Because it’s all a load of grade-A bull. Mateship my flat arse. I’m not shaking your hand, coz I wouldn’t want you to smear that shit you’ve still got on it, from trying to stick it up the last guy’s devastated arsehole. Leave your second-hand Akubra where you found it. Your smartarse head’s too big for it anyway. Thanks for the add? Yeah, well, delete this.

I love you x

bloke, fair dinkum, your’ve truly hit the nail on the Akubra with thisun. those city stickers’ve always thought we was dumb as a door nail and thick as a post. we’ll show em. i tip my akubra at you.

Thanks Bingo – how’s the nag?