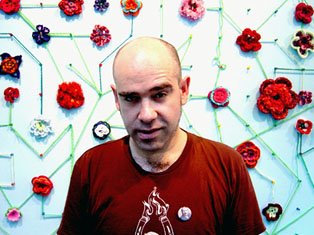 Lock up your bandannas, plectrums and notebooks, people – there’s a man on the streets who’s aiming to break your heart, like the way Wilco said they were trying, only this time succeeding.

The man who introduced the world to Catholic Autistic Terrific, who is now in the middle of a post-Balderdash hangover to rival anything tied on by the Rat Pack, stirred the hearts, minds and various extremities of the Melbourne spoken word scene two weeks ago with his show Death To Your Dreams, featuring Sean on vocals and cool hat, and ace band the Mime Set on everything else.

The performance, as part of the Emerging Writers’ Festival, was actually the second one put on by Sean and the band, after their apparently barnestorming show as part of last year’s Australian Idol competition. Think fab projections accentuated by moody shadow work from the Mime Set’s guitarists – okay, think Rattle and Hum.

My God, the Spanish Club PA made the band sound like a cathedral. Think heart-breaking lyrics and songs. Think about how much Sean’s gigs will cost to get into in the future. Think eye-patches. Think think. Think ‘four letter word starting with s, containing one e and ending with an an’.

thanks Mick Thomas, and thanks Davey. You know my parents had their honeymoon in Lorn. But I think it’s pronounced ‘Lorne’ these days as in Lorne Green. He’s a GREAT ACTOR. Luckily, everything worked out okay in the end.