Just like a Californian burrito maker, I’ve been preventing myself from spilling the beans by keeping them strictly under wraps (rim-shot!) but now seems as good a moment as any to announce that I will be moving to Stockholm. In ten days.

For the past twelve months I’ve been living and working in Karlskrona, a lovely ex-Naval town in the southern province of Blekinge. It’s certainly been a big change from the three years I spent in the crowded cities of the Netherlands; in fact, the only place I can think of that I can really compare Karlskrona to is Wagga Wagga – although I suspect Wagga has a few more pubs than K-Town, and is probably a little warmer in the winter.

Work-wise, my stint as a post-doctoral researcher as part of the ELMCIP project has challenged my idea of what literature can and should be in a digital context. Despite having been an editor of an online journal for the last eleven years, it wasn’t until I arrived here that I really considered the myriad ways in which electronic literature can engage with readers (players, viewers, users, co-creators).

As a consequence, I consider the most recent issue of Cordite, which features electronic works for the first time, to have been something of a watershed in terms of my own understanding of e-lit. In this context, it was great to be able to interview my colleagues Talan Memmott and Maria Engberg, both of whom have a great deal of knowledge and experience of digital literature and practice.

This year has also been a great one in terms of meeting other researchers and practitioners in the field of electronic literature. I’ve attended conferences in Jyväskylä, Karlskrona, Ljubljana and Amsterdam (where I also gave a paper), and acted as a co-editor of the forthcoming ELMCIP anthology of European electronic literature. I’m also really looking forward to being in Edinburgh for the final ELMCIP conference in November this year.

On a more personal level, it’s been really fun to experience all four distinct seasons here in southern Sweden, from last winter’s extreme snow and blizzards (strangely absent so far this time around), to spring’s slow awakening, summer’s long and glorious days and autumn’s drop-dead multi-spangled beauty. Karlskrona being a town surrounded by water, it’s also been great to see some of the islands in the archipelago, go for walks along deserted rocky beaches and get lost in seemingly endless forests. 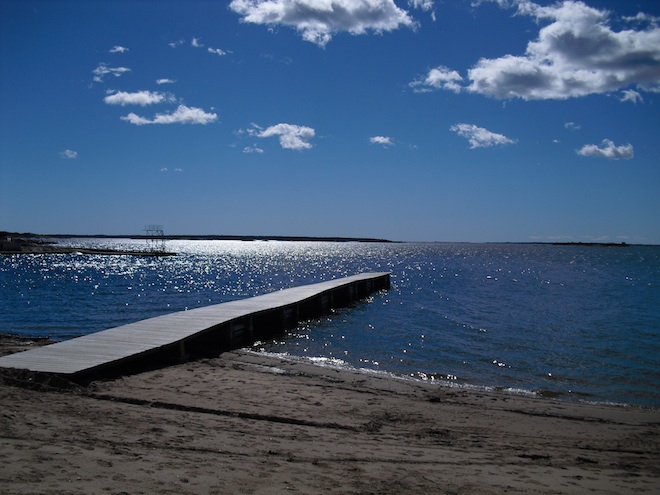 Of course, there’s never enough time in life to do everything on one’s personal ‘to-do’ list but I’m glad to say that I have experienced midsummer in all its ‘songs about frogs and drinking snapps’ glory; witnessed the batty antics of graduating high school students riding around town wearing sailor’s caps in the back of trucks; played some awesome games of kubbspel and mini-golf; tried and rejected the taste of sill, glögg and skagentoast; and been a part of the national celebrations when Melodifestivalen winner Eric Saade came third in Eurovision.

Now, as the nation prepares for another crop of Melodifestivalen losers, it’s time for me to move on once more. The good news, however, is that I’ll be moving to Stockholm, the epicentre of Sweden’s bizarre solar system and the home of the Melodifestivalen final. W00t!

In Stockholm I’ll be taking up a position as a research editor with the Stockholm International Peace Research Institute (SIPRI), an organisation which, for those who don’t keep up with these things, has apparently just been ranked second in the 2011 Global Go To Think Tank Index Rankings, just behind the UK’s Chatham House and ahead of Amnesty International, the International Crisis Group and any other (non-US) think-tank you’d care to mention.

I’m excited to be starting a new life in Stockholm, and looking forward to sampling the delights of the city’s bars, restaurants and cafes, as well as the multitude of museums, clubs and cultural activities on offer. Nevertheless, while it’s easy to see that Karlskrona lacks most of these things, I will miss being able to look out the window of my house and see the sea; and I’ll miss the laid-back summer days and the picture-perfect islands of Saltö, Dragsö and Langö.

Then again, if I ever win the lotto, I’m pretty sure that the first thing I’ll do with my squillions of kronor is buy a pretty little stuga somewhere on the archipelago, stock it with all manner of food and drink, and then while away my golden years playing kubb, whittling pieces of wood into ornamental pipes and distilling my own mead. Until then, I will take away many happy memories of Karlskrona, and hope to return again.

Bike Snob NYC on lobster deities and the modern world

Ten women who shook my world*