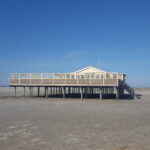 I arrived on the Waddenzee island of Schiermonnikoog (or Skiermûntseach in Frisian) today after a roundabout journey via Groningen, Leeuwarden and Lauwersoog.

I’d spent a long weekend just outside Groningen, in a cute cottage in the forest. I then took a train to Leeuwarden, but only had time for a 20-minute walk through the city centre. I’d like to return to this part of Fryslân again some time.

What followed was a long bus ride to Lauwersoog, and then two beers at a bar near the sluizen. Followed by one 10% alcoholic-volume brown beer on das boot to Schiermonnikoog (SMO).

Essentially, I was drunk on the Waddenzee, heading for Biermonnikoog.

What a bizarre little place Schiermonnikoog is. No cars, just electric buses and masses of bicyclists heading back and forth from the dunes to the town.

The dunes themselves, as expected, were windswept. To put it mildly, the sand blasted my face right off the entire time. The water was ice-cold, too. But boy, did that walk clear out the cobwebs.

I had expected the strandpaviljoen to be open but was proven wrong. It has an abandoned feel in this photograph.

I am presently lodging at the Hotel van der Werff, which has a very old-world vibe, as if it could be a set for a Paul Thomas Anderson film.

Tonight I sat at an outside table facing the street and ordered a beer and an oude jenever. It’s a thing I do whenever I’m in the Netherlands and feeling the need to take the edge off my mood.

In case you don’t know, jenever is Dutch gin, which is more like aquavit or mild vodka. To combine a jenever and a beer (either in the same glass or side by side) is to order a kopstootje (trans: ‘small head butt’).

I had only got halfway through the jenever when some old codger wandered by and remarked, Dat is en kopstootje.

His wife looked at the jenever and the beer on my table and replied, Nou, dat is echt en ouwemanse drankje, hoor.

Flat Out On A Highway Lined With Dim Stars