Patrick Jones is a conundrum: installationist, artist, provocateur, former bookshop owner and – yes, let’s say it – poet. Readers of Cordite would be familiar with Patrick’s contributions to the magazine over a period of years, including his cover image for Issue #11 (Pandora archive link) way back in 2002, the heartbreakingly beautiful Monument for the Unmanned, a piece Patrick himself described as one of a series of ‘deserter memorials as public works’: 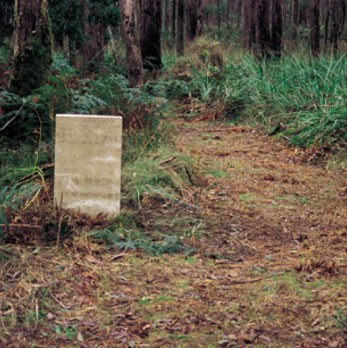 More recently, Patrick’s ‘visual poetry’ has also has been featured (the very fun Hector’s Insult) and reviewed (by James Stuart here, plus Patrick’s response). He’s also one to participate in public acts of artistic mischief, including his infamous graffiti wall on the move.

Now Patrick’s outdone even himself by engaging in some ebay activism on the subject of Melbourne’s bubblers (or drinking fountains, for the uninitiated). As Patrick describes it:

“A little while ago I called Melbourne City Council and spoke to an environmental officer about free drinking water points in the city. I had already mapped out 7 in the CBD from where I could refill my stainless steel water flask. He told me that there were between 12-15 bubblers in the city, not including park areas. It took me 7.5 hours on Tuesday (10 July) to walk the city locating water bubblers and I found 27 of them. 9 were damaged or not working, leaving 18 bubblers for an estimated 710,600 people using the city each day (figure attained from the MCC website). That is one bubbler for every 40,000 people in the city. To [me] this can only mean that the City of Melbourne and the State Government want us to buy water; want us to buy water bottled in plastic; want us to create a landfill disaster; want to give companies like Coca-Cola Amitil, who bottles Mt Franklin water, a green light to unethical and unsustainable business practices. If you don’t agree with these premises I’d love to hear your thoughtful critique outlining your reasons why.”

As part of his campaign, Jones is offering copies of his bubbler map for sale on ebay for the princely sum of $2.90 (presumably about the same as a bottle of water in 7-11): 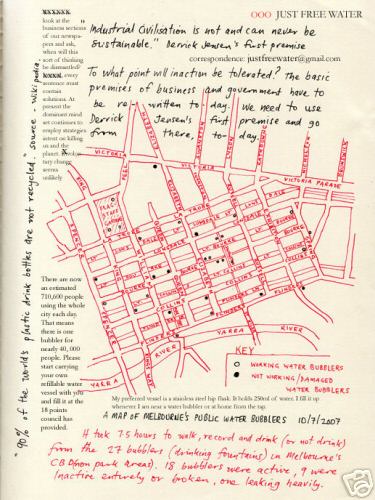 I say get on board. This is a subject that’s been particularly close to my own heart for some time. In 2002 I contributed a poem to US online magazine Shampoo and in the contributor notes made the following claim:

David Prater’s current project involves mapping Melbourne’s bubblers (drinking fountains, for the uninitiated), with a view to forcing local councils to repair the faulty ones. he’s toying with an online listing of bubblers, a partnership with a savvy travel guide book company, or possibly an alliance with mobile phone companies and GPS technology providers (who could potentially locate the functional bubblers and alert drinkers as to their whereabouts). He edits Cordite and always carries at least one litre of water wherever he goes.

I also had grand plans of teaming up with my friend Quinton to create a map that included not just bubblers in the CBD but also cheap food outlets located near these bubblers, making it possible, for example, to have a sensationally delicious and inexpensive sandwich at the Tucker Box sandwich shop near the corner of Elizabeth and Lonsdale Street and then stroll across the road and have a sip of cold water for free.

While unfortunately we never did get around to completing (hey, let alone starting) this project, I do think that our city’s bubblers should be preserved for everyone. So I’m very glad that Patrick has taken on this important mission. Let’s face it, as Patrick points out on the site (and in a letter published in last Saturday’s The Age), “… Coca-Cola Amitil pay the shire [of Hepburn] $2.05 per mega-litre of water, which equates to about $95 per year for endless amounts of water. This is theft.”

In this context, bidding $2.90 on a beautifully hand-drawn A3 poster doesn’t amount to much, does it. You can get involved in the Just Free Water campaign by emailing Patrick on justfreewater@gmail.com.

If only you actually wrote that, ‘Kelli’.

i love the mystery in all of this.

you can get to just free water via permapoesis