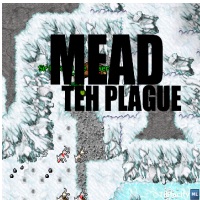 A word to the wise: hang in there. As we approach DNRC Records’ 100th release, things start to get interesting. Teh Plague is a jaw-dropping statement of intent from an artist who had been written off so many times in the past you might as well have called him a no-show and be done with it. Some may say that on this, Mead’s fourth and final album, the inventor of the Drkstixb has his ‘last laugh’; while others will append the words ‘here’s hoping’ to that otherwise melodious and complimentary catch-phrase.

The DNRC-Mead fairytale, of course, began with the release of Yea, Finery, a mashed-up medieval tour de force recorded straight to cassette in the Bourke Street mall. But the truth is that Mead had been busking up his trans-medieval fortunes on the Australian scenes for several years before Dreamnation came along that day in 2003 and offered him a dollar for a copy of the cassette.

Despite the ensuing legal wrangles over ownership of the album (which had been busked to within a chipmunk’s inch of its set-list’s (short) life anyway), DNRC Records would have profited handsomely from the album, if it had not been deleted from the DNRC Records catalogue some time later that year. Why DNRC went on in 2004 to release Mead’s second album The Mists of Thyme nobody knows. Like all difficult second albums, The Mists of Thyme tanked the moment it was deleted.

In 2006, after a long self-imposed silence, Mead announced his masterstroke – a third album, to be released, once again on DNRC Records, despite the fact that Mead and DNRC only ever had a two album deal. Onza Rocku, if not a dramatic statement of intent, was at least a step in the right direction for both artist and producer, with Mead learning the basics of sheet music, and Dreamnation behind the mixing console, twirling knobs in the Tribesco recording studios and refining the bone-chilling sound of Mead’s Drkstixb.

That Dreamnation and an alleged seventy engineers were able to rein in and yet at the same time melodiously capture the driving sonic force of this unique instrument was a wake-up call to the World Music community. That the album was, nevertheless, a spine-numbing collection of gravy-laden bull carpet really took no one by surprise. It too was deleted, without even a hint of sadness, the moment it appeared on the horizon.

Just seconds after the deletion of Onza Rocku, finally starting to get the hang of record industry negotiations, Mead and his cohort (including his Chilean backing band) announced in an emergency press statement their intention to record a fourth album, Straight to Drkstixb. It is now believed that a last minute peace treaty had actually struck between Mead and Dreamnation, with members of The Guide Ponies acting as arbitrators, calling off the potentially explosive recording process.

And so, we fast forward almost twenty years. Twenty years in which the world has lived in peace, secure in the knowledge that however bad things might get, with the purpelrain and the skywars, at least Mead wouldn’t be releasing any more albums. Ever. The long and slow recovery in world confidence was shattered however in late 2021 with the announcement of the first underground test release of Mead’s new ‘Wall of Drkstixb’ single, rumoured to be seventy eight minutes long.

Indie kids and net jockeys cocked their heads, held koptelefons and mobiels to their ears, pressed ‘send’ or ‘play’ when they heard the blast – a towering bass-boom hit that could be heard in any lounge room in the world fitted with an Internet connection. This in turn led to Mead’s outright flaunting of the unspoken and unwritten agreement concerning his non-participation in the music industry by announcing in 2024 that he would be conducting another underground test-release.

Dropping in just on the leisurely side of sixty hundred earth-shattering minutes, Teh Plague, while not as unpronounceable as the never-released Straight to Drkstixb, is surely the final wake-up call for anyone interested in the future of music. Because if there’s one thing that’s guaranteed to make you sit up, stand up, double-take and go into a ‘ga-ga’ whiplash spin about music, it’s the serene and magnificent pleasure of turning this album off before it’s even started.

While this might sound like a glib dismissal (and for all the Mead fans out there, yes we were there and we did hear the underground testings and they did sound like a series of naff but loud explosions), we’re asking you to trust us on this one. You don’t want to go here. You don’t want to be led through these caverns of plaguepus unmeasured by man. You don’t want to have pustules and sores rammed in your face for six hundred minutes by a demonic peasant armed with what is clearly an outlawed instrument of torture.

If only Teh Plague was really just six hundred minutes long. In fact, aftershocks were reported after every test release of the album, lasting for between one and sixty days, depending on the listener’s proximity to Majorca. Small islands in the Pacific also disappeared duting this time, leading several enviornmental scientists to believe that Mead and others (hello The Guide Ponies) were actually accelerating the destruction of the Polish ice caps.

How appropriate, then, that this album and its medieval mad-maker would end up being cryogenically frozen in expectation of their ultimate deletion, an event looked forward to and watched by millions and described as ‘moving’ by at least one bystander. Indeed, perhaps the most emotional moment in this bizarre procedure occurred when DNRC engineers placed Mead’s beloved Drkstixb in the cryo-chamber, and we heard, hopefully for the last time, a small wall of pule emanating from its many strings. We shall never hear its melodious plainsong again.

You’ve gone a bit quiet, Davey. Is everything under control? I miss you.