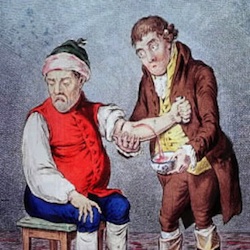 DNRC founder Davey Dreamnation first heard the mighty, mighty sound of the Hippocratic Oats one night in 2003 while out walking his pet llama, Scaramouche. The band, whose two members are both qualified natural therapists, had set up their instruments in front of the llama’s cage; in the ensuing scuffle Dreamnation inadvertently set off a cascading synthesiser loop and the rest is their story. Pandemonium broke out in departments of integrative medicine around the world upon the release of “Does”, the band’s first single. Vocalist Dr. Phil Good claimed, through the band’s (now-banned) website that the one minute pop song had special healing properties. The veracity of this claim was later verified in an issue of the NME, after investigators played “Does” to one group of teenagers with cold sores, while subjecting a control group to Enya’s “Orinoco Flow”. The results clearly proved the group that listened to “Does” fared much better than the control group, whose class action against Enya and her recording company has been held up in the court of petty recording sessions. The publicity generated by this unusual breakthrough in the treatment of herpes simplex led the band to patent its own papaya-based remedy for that unfortunately disfiguring condition, and to give away one tube of the stuff with each single released. Within days the song was at number 2 on some charts; on others, including the recognised industry charts, however, it did not appear. Unfazed, the Hipocratic Oats conducted a tour of emergency rooms across the country, the results of which would be shared with the world on their debut album, “Golden Staf Greats”. Copies of the single (which has, unfortunately been deleted) may still be found in the usual places. However fans are advised to exercise caution when handling any second-hand tubes of Hippocratic Oats’ Papaya Cold Sore Remedy.