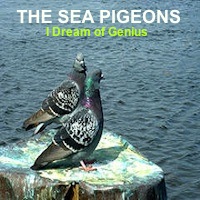 Criminally under-rated in their native Ganmain, The Sea Pigeons burst onto the Western Slopes and Plains music scene with this ferocious album of paint-stripping anthems, then promptly broke up. Like a bomb whose fuse has almost run out, their incredibly violent and incendiary live shows led one reviewer (writing in the Griffith street press) to comment that their audiences would live a safer existence as anti-drugs campaigners in that predominantly grape-growing region. Opening with squalls of suitably industrial feedback, this astonishing album (clocking in at a respectable late-1970s running time of 7 minutes 33 seconds) features twenty eight tracks, each of which has been recorded, drilled and then thrashed to within an inch of its (admittedly short) shelf-life. Highlights include “Again” “Again 2” and “Yeti Again”, each of which offers its own take on pseudo-nihilism, with footnotes. Reprising their self-produced debut EP with the quivering mess that is “Nosebleeds”, The Sea Pigeons manage to cram so many guitars into the one song that one eventually pops out, forming the coda that is “Scared Tissues”. Impeccably produced (again, by the band themselves), the bridging instrumental “Don’t Say Anything” offers a moment of sheer relief from the onslaught before kicking back into shape with a trilogy of core-hard mashers, the unspeakably triumphant “Sonical”, “Appendix” and “Small Faeces”. No band has rammed a sound so hard into their listeners ears, either before or since, and so it should come as no surprise that The Sea Pigeons imploded under the weight of their own collective fury, managing to release only one more single for DNRC, the utterly bad-mouthed “Hair Collapse”, the b-side to which was so ferocious it could not be recorded. This album, a must for anyone with a shred of self-respect, pumps so hard it should be arrested, if only it hadn’t been deleted, sadly, though fittingly, on ANZAC Day, 2004. We will never see their likes again.