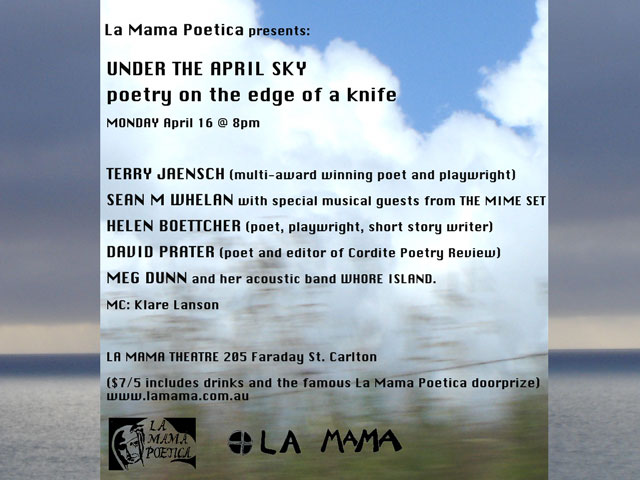 What a way to begin the month of March – ie, by looking forward to the month of April, my favourite month of the year! Yes, that’s right – as the flier above explains clearly enough on its own, I’ve been invited to read at the April edition of La Mama Poetica, MCed by tech-queen Klare Lanson this Monday 16th April at 8pm. Yippee!

No, La Mama Poetica is not the name of my mother, or anyone else’s, although while studying Australian Literature at university I was taught that La Mama (along with the Pram Factory) was/is the Holy Mount of Australian drama. Kind of like what the Punter’s used to be to Melbourne indie rock, or the Nuyorican Cafe is to slam poetry in New York City. I’m lucky enough to have been to both the Punter’s and the Nuyorican but alas unlike my friend and soon to be fellow-La Mama Poetica poet Sean M Whelan (who braved the parochial Nuyorican crowd and managed to break a few Manhattan hearts) or my favourite band The Fauves (who reportedly played the Punter’s 42 times) I’ve never performed at either of these venues.

I’ve never performed at La Mama either, though I have been there once, for the launch of an issue of Famous Reporter, and was impressed with the claustrophobic/ broom-cupboard feel of the space – and I thought at the time that if this place is considered the Holy Mount of Australian drama, then it’s no wonder the Australian drama scene is so small. Actually, scrap that, because I have been to see a one-person play at La Mama, a long time ago, and to tell you the truth it was an intense experience – the bleachers are so close to the stage you’re actually kissing the actors as they mouth their lines.

All of which makes the prospect of performing at La Mama even more daunting. I mean, how is anyone going to out-do Terry “The Lady Writhes” Jaensch in a venue like La Mama? For him, this event will be like being the Australian team taking on Bangladesh at the MCG – ie, with his acting smarts, Mr Jaensch will have the home ground advantage and will probably wipe the floor with each of us in turn, unless of course he rememebrs to bring his bandanna.

Then of course there’s Mr Whelan, heart-breaker, dancing bear and Weddings, Parties, Anything (WPA) fanatic, who promises to serve up a stupendous dish of lovelorn musings, unbeatable gags about monkeys (please, Sean – can you do “No Ice”?) and odes to Mick Thomas, meaning I’ll have to scrap my entire setlist and start again.

I’m afraid I haven’t seen Helen Boettcher perform but she still terrifies me anyway and I’m sure her poetic skills make me look a bit like Pam Ayres did before she learnt to write. And as for Meg Dunn’s Whore Island – well, I think you know how I’m feeling about performing on the same bill as her: that’s right, I’m seething. Seething.

In any case, I’d issue a general call to arms and encourage everyone I know to attend on on the night of Monday 16th April at 8pm for the measly sum of $7/$5 including drinks but seeing as only about six people can fit in La Mama at the best of times, I’ll content myself with wishing my fellow performers luck (and getting ready to seethe some more on the night).

Due to Davey Dreamnation’s ill informed labelling of myself as a ‘WPA fantatic’ I have instructed my lawyers to immediately begin a class action libel case. My lawyers have further advised me that I can’t comment any further on this particular blog entry as it may jeopardise proceedings.
Needless to say though, not every single day is Father’s Day after all.
And it’s goodnight from him.
Your witness, Dreamnation.

I object to your insinuations, Mr Whelan.

And I would merely like to point out to you that it’s just not true to say that “every single day” is Father’s Day, I mean that’s just ridiculous and not what Mick Thomas intended. You of all people should know that it’s “every single Saturday” that Mick reckons is Father’s Day. I’m not sure why you’re so embarrassed to be outed as a WPA fan. If it was good enough to shout to the rooftops in Croxton last weekend during that unplugged gig of yours where you belted out passionate renditions of “Roaring Days” and other WPA gems, then it’s good enough for this blog. I’ll bet you’re seething that your defence team have put a gag on those typing fingers of yours now. And that’s goodnight from me, too.

JUDGE: Counsel, my chambers – NOW! BOTH OF YOU!