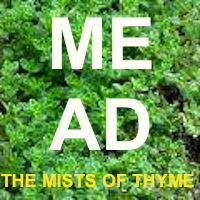 Dynamic, taut, feisty, and clever as ever, “The Mists of Thyme” is Mead’s fourth-best album.

At least, that’s the word from DNRC founder Davey Dreamnation, who claims to have listened to not only its predecessor, the exquisite Yea, Finery, but also the two scheduled for release later in 2005, despite the fact that they haven’t even been recorded yet, not to mention the fact that Mead and DNRC have only signed a two-album deal.

Regardless of the contract nit-picking, however, Dreamnation is so far wrong he might as well call himself Wrongnation. “The Mists of Thyme” is a colossal achievement from a man who, only one year previously, was busking in the Bourke Street mall in Melbourne, greatly amusing passers-by with his Drkstixb solos and trying to flog off dodgily-recorded cassettes.

On this triumphant release, Mead finally comes into his own – that is, he manages to straddle both the Middle and End Ages, carving a niche in world music it would be wise for Mr Peter Gabriel to pay attention to.

Whereas the trademark Drkstixb flourishes on “Yea, Finery” were hidden deep within the mix, on this sprawling odyssey of a landmark, Mead lets it all loose, cannoning into the medieval plainsong tradition with a double-barrelled dose of pure Mead geniosity, mixed with lime.

Of course, none of the breathtaking experiments that drench this album would have been possible without his backing band, the Mistaken Incas, whom he found plying their trade in the northern Croatian city of Rijeka, (pan pipes, synths, backing tracks, Native American Indian uniforms), whilst on one of his many voyages into his own moodswings.

Impeccable sequencing and amazing sixteen part harmonies dominate this album, sweeping in to scoop up the listener in an enthralling example of the wisdom of that old chestnut ‘show, don’t tell”.

There are too many highlights on this album to mention any of them by name. There are also approximately twenty tracks (one can’t be sure, as the complete meltdown that is album-closer and nominee for Nosebleeder Of The Year, “Trans-Drkstixb-Express” segues into so many individual components that it could in fact be a car or a peace treaty as opposed to a song).

Effortless, devastating, smallpox-ridden and soaked in plague juices, “The Mists of Thyme” might well have been the album to secure DNRC’s fortunes for all time had it not been deleted, stupidly, the day before it was released.