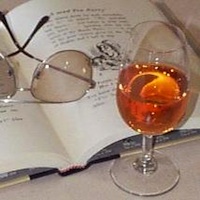 DNRC’s final release for 2003 returned, fittingly, to the Middle Ages. Medieval superstar Mead, whose talents were first spotted by Davey Dreamnation while trolling through the Bourke Street Mall in search of a new act to sign, is probably best known for his second album, The Mists of Thyme. However, it’s this sad and deleted release that set the stage for that astonishing tour de force. Let’s face it: without Yea, Finery and all its faults, there could never have been a The Mists of Thyme. And that’s something for which we should all be thankful.

Mead’s trademark instrument, the impossibly complicated and unpronounceable Drkstixb, haunts every square yard of this melancholy affair, which hints at Clannad and Eyna’s Watercress in equal parts. Without wanting to get too specific about the qualities of the Drkstixb as an instrument, let it be said that it is eminently suitable for busking and live impromptu performances.

Tracks such as ‘Pus 1’ and ‘Mead’s Theme’, along with live favourite ‘Elysium’, make this album a real wizard’s sleeve to hear in stereo.

To complement the release of the album and as an incentive to new fans, Yea, Finery also came with a bonus disk containing seven of Mead’s early instrumental workouts, which he first made available via shoddily recorded cassette tapes.

Here, in their spangling new digital context, the songs form an epic madrigal, evoking flailing skirts, handkerchiefs and harps to varying degree. However it is the final track on Yea, Finery, the simply astonishing ‘Middle Aegis I-IV’, that justifies the excessive cost of producing this album in the first place.

Teaming up with some of the Chilean musicians with whom he once competed in the afore-mentioned Bourke Street Mall, Mead pulls out all the stops on this jaw-dropper of a track, effortlessly melding mischievous pan pipes, fickle bodhran, simpering word play and tetanus-tinged harpsichord to produce an unspeakably dervish-laden ring of fire that was initially deemed unreleasable due to its sheer majesty and technical complexity.

Fittingly, the Drkstixb solo that culminates in a ferocious wall of lutes produces an effect in the listener not unlike the plague itself, leaving this reviewer at least spitting in apoplexy.

Bootleg copies of this album may still be purchased in the usual places, however due to a contractual dispute between DNRC Records and Mead, the original tracks may never be seen or heard again.

Where do you go to my lovely
When you’re alone in your bed
Tell me the thoughts that surround you
I want to look inside your head, yes I do

I remember the back streets of Fitzroy
Two children begging in rags
Both touched with a burning ambition
To shake off their lowly-born tags, so they try

So look into my face, Scaramouche
And remember just who you are
Then go and forget me forever
But I know you still bear the scar, deep inside, yes you do

cripes!
have you set that to music?
😉