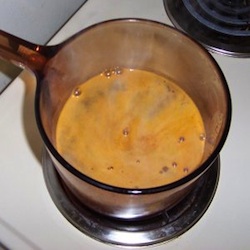 Scaramouche’s all time favourite band paid Stung a posthumou(rou)s compliment by name-checking him in the title of what will hopefully be remembered as their “difficult” third album. Of course, the banal industry discourse surrounding difficult third albums fails to acknowledge that for most bands, every album is difficult. In fact, the “difficult third album” syndrome only ever comes into play when the first two haven’t been universally condemned as crimes against humanity. And so, we come to Seethe. On their debut, 1999’s “Images of the Ocean Seething”, Seethe tempted fate by assembling a long list of favourite songs, covering them, then calling the remixed results “seethe-hop”. An impeccable blend of cricket-beats, animoid drones and schlock-stick, this double record was hailed upon its release as seamless art, worthy of further epithets including great, breathtaking, sublime, stunning, gorgeous, epic, spellbinding, incendiary and (of course) seething. 2001’s follow-up, the commercially oriented “I Can Seethe the Sun”, featured a more tripped-back sound, while also demonstrating a straight-edge restraint, as shown by the fact that rather than record “songs”, the band chose instead to “song” records, creating glacial soundscapes from needles hitting various grooves. Universally misunderstood, the album’s notoriety was only increased by Seethe’s refusal to tour, leading to speculation that they did not actually exist, a situation further compounded by the fact that even the staff at DNRC had never seen all band members together in one room. Things came to a head with the release of their afore-mentioned difficult third industrial nose-bleeding album “Stung By a Bee” in 2003, which was itself the cobbling together of two Japanese-import only EPs, “Seethe Live At Budokan” and “Budokan Seethe at Live”. Critics immediately criticised the LP for its omission of stand-out tracks “Seethe In the House” and the epic stonewaller “Dirty Dishes”. Condemnation by fans duly followed, leading to a vigorous trade in illegal bootlegs of both the EPs. Commercial failure was the logical result and Seethe, while sadly deleted, still hope to follow up their “difficult” third album with a fourth rumoured to be “technically undoable”.