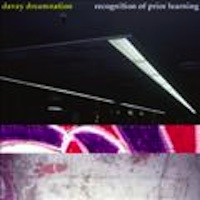 A resurrection of Daveyís fortunes failed to coincide with the release of this, his incendiary though widely ignored sophomore album, due probably to his decision not to release every track as a single in its own right, a tactic which made the world sit up and croak when he released Islands In the Stream of Consciousness. But enough about historical masterpieces. This album could rightly be considered Davey’s difficult third album were it not for the fact that he only ever released two. Opening track “Trial Version” was created with a trial version of a free drum machine available over the internet – at first annoying, then intellectually smothered. Originally slated for release on the imaginary ‘Maple Lanes D.P.’ E.P., “Alien City Echoes” shows Davey really kicking out the jams, spitting his anger into the $2 microphone in a tirade against Melbourne and its most revolting suburb, Hawthorn. Unfortunately, the song was so incendiary its master copy was found in the [d/dn] archives and is no longer listenable. Thank your lucky stars if you already have a copy of this track on your computer at home. It remains worthless. “Dim Stars 2” is a definite contender for Davey’s all-time greatest song. Powerful drums rub up against a muscular acoustic four string guitar, to produce a foundation upon which Davey builds his finest lyrics ever! In fact, they’re exactly the same lyrics as in Dim Stars (1). “Maple Lanes” derives from the name of a bowling alley in Brooklyn, NYC. The song itself, featuring Davey playing every instrument including his car keys, is perhaps a candidate for Davey’s *worst* song ever. The lyrics (though hard to hear) deal with a pyromaniac set loose in a state forest with a compass and a magnifying glass. A brilliant anti-arson song. Who would have thought that “Boost Bass, Free Quincey”, an innoccuous piece of crappery, would set alight the imaginations of listeners? Well it didn’t. “Running After Kiara” is a song based on the real life story of a girl who was murdered in Perth a few years ago, the lyrics of this song relate a dream in which the protagonist (davey) relives the tragic ordeal backwards. Seriously. What else can we say except that the album’s title track deals with that terrifying ordeal, the RPL test, in which everything you have learnt up until the point at which the test commences is summarised and then handed back to you in the form of a small (if well-designed) certificate of recognition of prior learning. A devastating indictment of the Australian public service.